In early 2019, when I accepted the invitation to a new Facebook group, the Tango Queens, I would never have imagined how much it would become a part of my life.

I actually considered rejecting the invite because I could not relate to the name. Although I use the term in class (e.g."walk like a queen"), it somehow sounded girly and I mostly expected make-up or shoe recommendations. Yes, there are such threads, but many more serious topics were and still are being discussed in a very engaging manner. This group was indeed needed!

Very soon, the idea of a congress for women was born and I found myself in the organising team gathered by Monika Jurkiewicz, a polish dancer living in London. Monika is the founder of the Facebook group and therefore it was natural that she took the lead. Most of us did not even know each other personally and as we were spread far apart, our team met over the course of an entire year via Skype to prepare the intricate details of this ambitious project. The other team members were:
As anticipated, the logistical preparations for the first TQC would become quite extensive. Although I have been organising tango events since 2001, this was an entirely new category. We needed a venue in which 3-4 different activities could be conducted at the same time, a round-the-clock catering, a main hall with a podium and complex technical setup to allow for panel discussions, lectures, big workshops and milongas. That all went far beyond the scope of a simple Encuentro, Festivalito or workshop-weekend. I was nevertheless lucky to have an experienced local team as well as the support of the location owners and we even got a small grant by the city of Saarbrücken. So all went well on the home front! 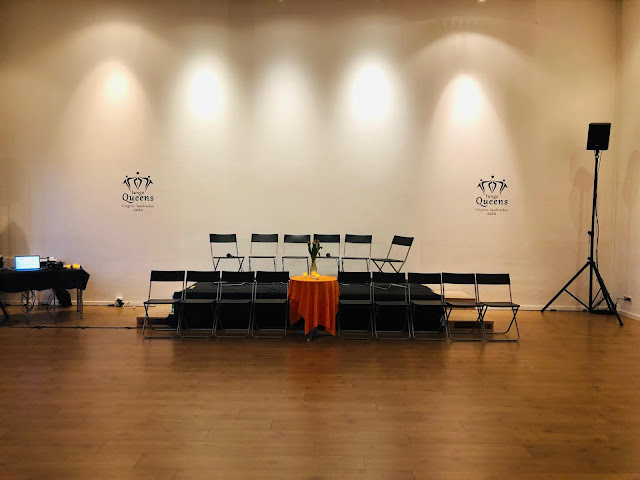 As for the programme, our team put together a multifaceted choice of activities: 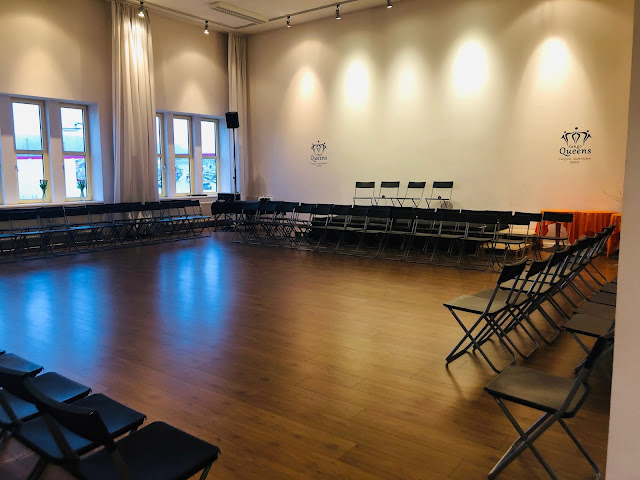 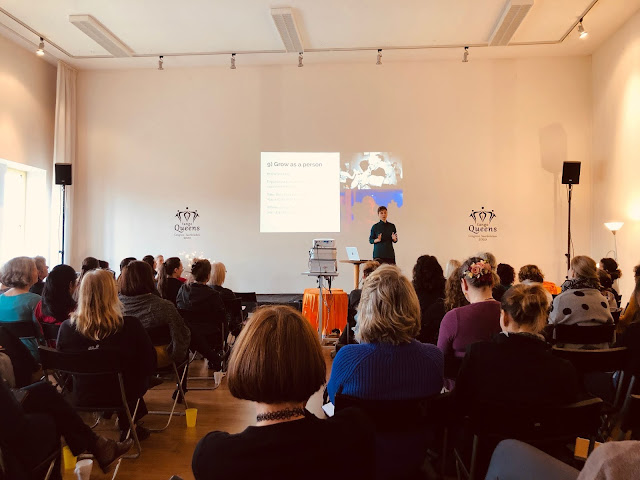 Because I was so busy with the logistics and leading so many group activities, I unfortunately had very little opportunity to sit in as a mere participant. I regretted that because my original motivation was to bond and engage. Now I spent far too much time running between the different rooms and facilities. I would definitely take on less responsibility at another occasion. But this is not uncommon when organising a new event: it took years until I had developed a form of organisation that allows me to actually dance during our encuentros.

This is why the following observations are more from an organiser's and teacher's perspective. Those who were "only" participating had the chance to develop a more emotional connection to the whole process compared to someone who is on the clock. I nevertheless would like to share some impressions:

I found it astonishing how harmonically and constructively 120 women of different age-groups, cultures, sexual orientations and tango backgrounds interacted. There were differing opinions and not everyone felt a deep "sisterhood", but the general benevolence created a very special atmosphere that was different from every other tango event. I have been leading Ladies-Only-Seminars for many years. They have a similar feel, but the sheer number of congress participants had a very uplifting and empowering effect that is impossible to create in a smaller group. It also allowed us to experience two milongas in which men were not missed. I hope it convinced everyone present, that we need never complain about too few male leaders with such a potential of lovely dancers right at hand!

As a teacher, I am super proud that so many of my students and numerous of my teacher-training-graduates took part in the congress, either as participants or as helpers, teachers and speakers. Over the past few years, many of them have not only worked on their leading skills, but have also participated in building a network of women in tango. From their personal feedback I can tell, that their motivations and connections have been reinforced through their experiences at the congress.

Before and after the congress, there were quite a few critical voices, in particular when it came to excluding men. I understand the fears beneath some of the critics' accusations, but can assure them that the "safe space" created by the congress was at no time abused for bad-mouthing men or for resorting into mere complaining. Most of the time, we did not even think about men. Discussions and talks were either referring to one's owns feelings or a more general perspective trying to understand the female situation in tango. We also did not burn bras or hold other rituals that are connected to hard-core-feminism. Actually during one of the plenary activities, only very few women raised their hands when being asked if they understand themselves as feminists. I feel that what matters aren't labels but the wish to stand on your own feet and be self-determined without having to put the blame on "the men". The red thread in all discussions, workshops and talks was that we've all got it in us to change our situation to the better! 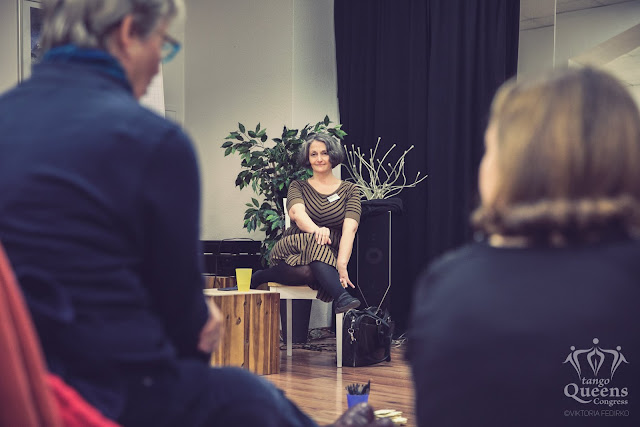 But besides all these empowering words and the fact that women can be as good leaders as men (in all fields) we cannot deny that there is still a technological bias that makes many women dependant on men. We discussed this when it came to women as djs. There are still quite a few female djs with very little technical know-how who rely on their "guys" being present. A limited technological focus can also be an advantage because it makes women concentrate on what is important: creating a flow and playing nice music instead of obsessing about nerdy sound-quality-details. But for our congress, it also meant that we could not do without male help. After a quite desperate search, a good friend of mine volunteered to travel from afar and be there over the whole weekend as our sound-person. I have to admit: My logistical team anyway included my sweetheart who - as a non dancer - acts as the chief logistics-person at all our Tangokombinat events. Having such an experienced help in the background allowed me to actually conduct the content-sessions I was responsible for. Our technical advisor on the other hand actually was "in the room" during some of the sessions because of the complex technical setup. He did super in being invisible and I don't think that any woman was disturbed by his presence, but still: more radical voices could argue that a female congress should not have to rely on male help. 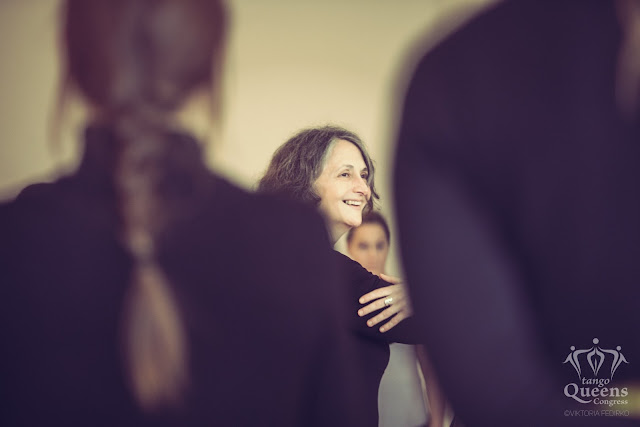 I am not one of them because I do believe that we anyway have to cooperation to make our tango world better. Independence is important, but no one lives in a vacuum. This is why I also think that there should be future events that include male dancers. Most likely not the next one and maybe not under this label, but ultimately some important discussions should not be held without this significant minority in tango.

Out of personal reasons, I will not be participating in the organisation of the next Tango Queens congress. I hope to be there as a participant or - if the new team decides so - as a teacher/speaker and I will certainly follow the development with geat interest. 2020 was just the beginning of something wonderful and necessary. I am looking forward to what comes next! 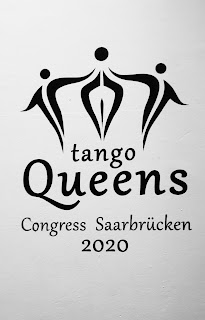 Information about location and staff:
The first Tango Queens Congress took place on January 24-26, 2020 in Saarbrücken Germany. The venues were the Acting and Arts school, the space of photographer Jean Laffitau and the Tangokombinat studio. All local helpers were Tangokombinat members or students of the acting school who were co-ordinated by Thorsten Janes. I would like to mention Estrella Ina in particular who produced the great wall-tattoos. The sound-specialist was Gregor Killing, dj and dedicated tanguero. I would like to thank all of them. Without you, it would not have been possible!

Photos in this post:
Photos 1-3 are by me and show three different setups of the location: Milonga (with tables), opening activity (no tables, but space to move on the floor) and plenary discussion/lecture (in this case lecture by Veronica).
Photos 4 + 5 are by Viktoria Fedirko and show me leading the dj-discussion and teaching an empowered followers class.
Photo 6 shows the wall-tattoo and is by myself.

Melina Sedo
Melina travels all over the world to teach argentine Tango with her partner Detlef Engel. She organises events, has produced an instructive book+DVD, acts as an agent and coach and much more... All in the name of a close-embrace, social dance for those who seek quality in their encounters.